Located in North Carolina’s Cabarrus County, the Reed Gold Mine is the site of the first documented gold find in the United States. It was 1799 when a young Conrad Reed scooped up an unusual yellow rock near his family’s farm at Little Meadow Creek. For three years, the glittery 17-pound oddity served as a doorstop at the Reed house. 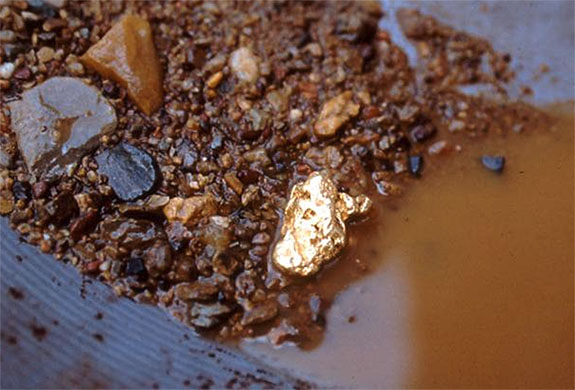 Conrad’s father, John, finally decided to take the stone to a Fayetteville jeweler in 1802 and learned that his son’s find was actually a giant gold nugget. In today’s dollars, the stone was worth more than $517,000.

News of Reed’s discovery soon led to a rush of gold production on the Reed property, in nearby counties and in other southern states. At its peak, gold mining was second only to farming as the top employer in North Carolina.

Today, the Reed Gold Mine is a National Historic Landmark and listed on the National Register of Historic Places. The site is managed by the North Carolina Department of Natural and Cultural Resources, which offers guided tours of restored underground tunnels that date back to the 1830s. A reconstructed stamp mill — a machine that crushes ore to extract metal from rock — is demonstrated daily. The stamp mill technology dates back to the 1890s.

In addition, visitors get learn how to pan for gold. The last two panning days of the fall season are October 24 and October 31. Tickets may be obtained at the site’s gift shop and are sold on a first come, first served basis on the day of the event.

According to the mine’s website, John Reed had been a Hessian soldier, who left the British army near the conclusion of the Revolutionary War. Reed and his family decided to settle in the lower Piedmont of North Carolina, where they raised corn and wheat. Reed’s humble lifestyle would change dramatically with the discovery of gold on his property.

Reed formed a partnership with three local men, who supplied the equipment and manpower to dig for gold in the creek bed near his home. The men mined mainly during the off-season when they were not farming. Before the end of their first year of operation, a slave named Peter had unearthed a 28-pound nugget.

“Placer,” or creek, gold mining soon led to underground mining. The locals learned that gold was often present in the veins of white quartz rock. A very wealthy John Reed passed away in 1845 at the age of 88. The last underground mining at Reed’s property took place in 1912.

Due to COVID-19 restrictions, the historic site is operating at 50% occupancy. All visitors are required to wear face coverings and respect social distancing and hand-washing requirements.